Australian house prices surged in March, and it wasn’t just in Sydney and Melbourne

Australian house prices surged in March, and it wasn’t just in Sydney and Melbourne

Australian house prices continued to soar in March, and not just in Sydney and Melbourne.

According to the latest Hedonic Home Value Index released by CoreLogic earlier today, capital city house prices rose by a weighted average of 1.4% last month, leaving the increase on a year earlier at 12.9%, the fastest seen since May 2010.

This table from CoreLogic shows how prices in individual capital cities fared in March. 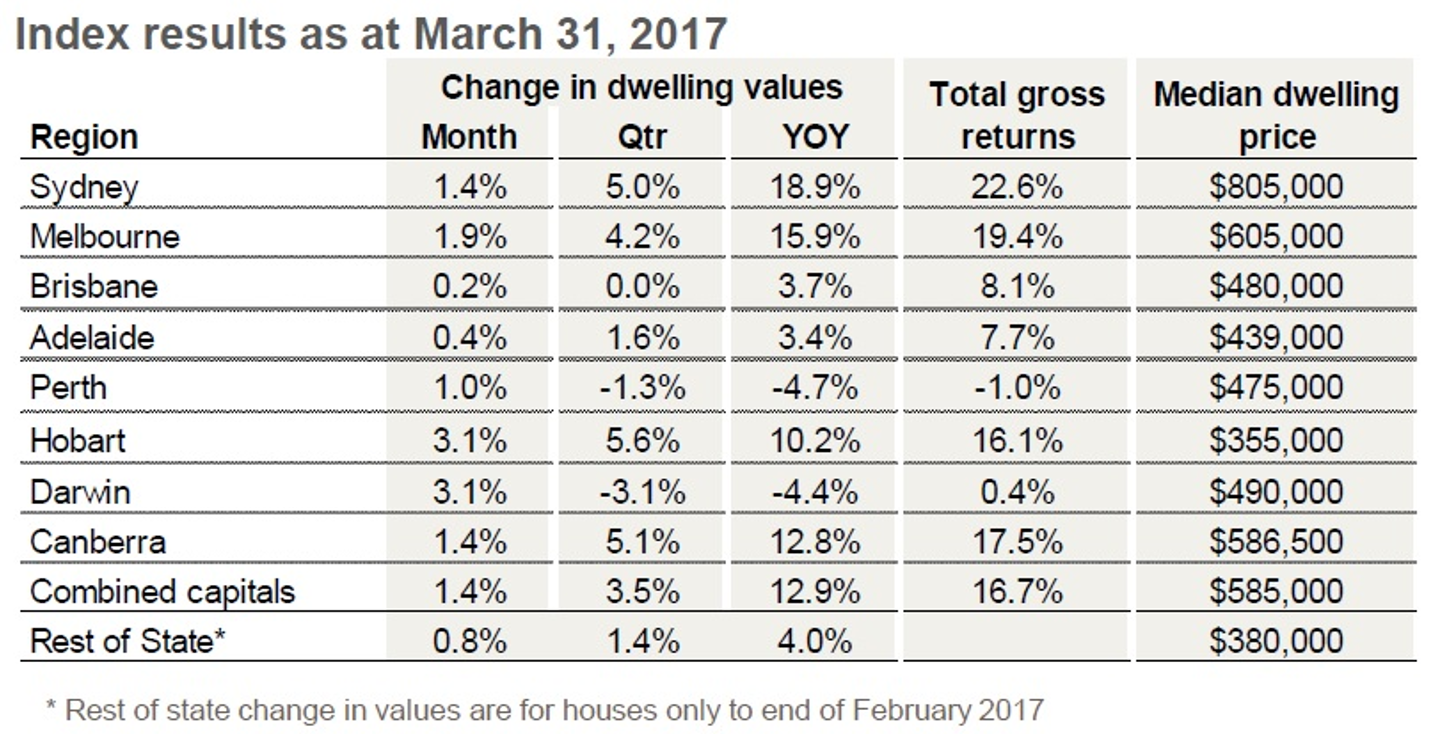 At 3.1% apiece, prices in Hobart and Darwin recorded the strongest growth in prices, while those in Canberra and Perth logged gains of 1.4% and 1.0% respectively. Adelaide and Brisbane recorded more modest increases of 0.4% and 0.2%.

While the price growth was uneven across the capitals, with all capitals recording an increase in prices over the month, it suggests that the strength in the Sydney and Melbourne markets are now spreading across the country.

For the quarter, prices rose by over 5% in Sydney, Hobart and Canberra, and in excess of 4% in Melbourne. Adelaide, at 1.6%, was the only other capital to register an increase. Elsewhere, prices were flat in Brisbane but fell in Perth and Darwin.

In weighted terms, and largely reflective of ongoing strength in Sydney and Melbourne prices, prices across the nation’s capitals rose by 3.5% over the quarter.

A huge increase, and one that suggests demand for property remains as strong as ever despite out-of-cycle mortgage rate increases from lenders and the threat of tighter lending restrictions, and potential changes to the tax treatment of housing, from Australian policymakers.

As a result of the enormous increases registered in the quarter in Sydney, the median dwelling price in the city surged to $805,000, up 18.9% on a year earlier.

The variance in prices across the country in the past year underlines the multi-speed housing market we’re seeing at present, and underscores why the most acute concerns over financial stability risks and housing affordability are centred around Sydney and Melbourne.

As this chart from CoreLogic reveals, the median dwelling price in Sydney has now increased by 109.2% since January 2009. Prices in Melbourne, at 92.4%, have also risen substantially over the same period. 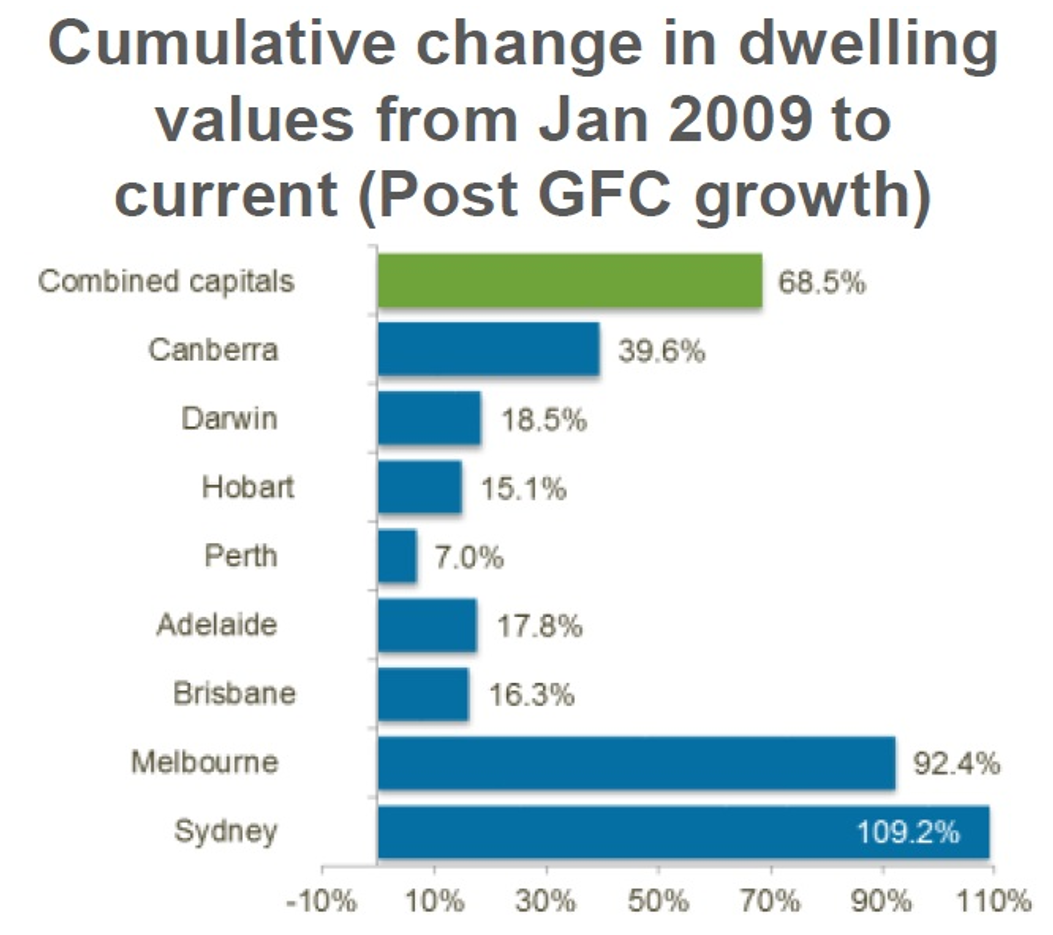 By type of dwelling, CoreLogic said that in combined weighted terms, house values were 13.4% higher over the past twelve months compared with a 9.8% rise in units.

Lawless says that every capital city currently has fewer residential properties advertised for sale compared with a year ago, which, along with strong demand, is helping to stoke price growth even more.

“A shortage of advertised stock can contribute to upwards pressure on prices, as prospective buyers experience the fear of missing out which reduces a buyers ability or willingness to negotiate on prices and causes some urgency in the decision making process,” he says.

He says that strong demand can be attributed to the rising number of investors participating in the market compared with a year ago as well as the lower cash rate stimulus and population growth.

While those conditions have helped to fuel rapid price growth over the past 12 months, Lawless is not sure whether that strength will continue, particularly with Australia’s banking regulator, APRA, announcing late last week that it will now limit interest-only loans to 30% of total new mortgage lending.

“Given the recent policy announcements are aimed at dampening investment related credit demand, we can expect lending conditions for investment purposes will tighten, particularly for investors with small deposits or those applying for an interest only loan,” he says.

“Additionally, higher mortgage rates handed down by Australia’s major banks may contribute towards cooling some of the exuberance being seen in the largest capital city housing markets.”

Lawless also believes that record-low rental yields for investors due to ongoing price gains, along with affordability constraints limiting new entrants to the market and increased unit supply, are also likely to act as a brake on capital gains in the period ahead.