Do You Know Your Responsibilities As Director?

Do You Know Your Responsibilities As Director? 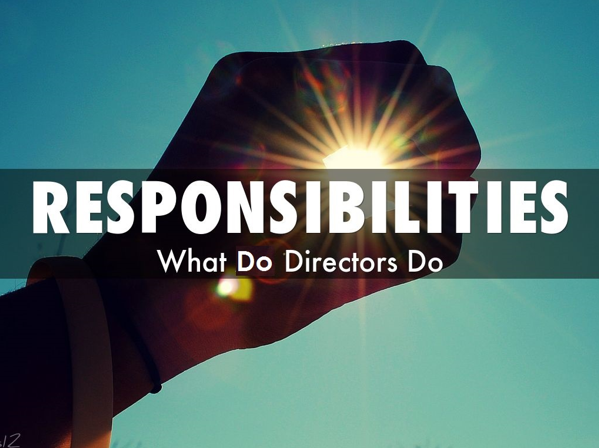 You must comply with your legal obligations as a director under the Corporations Act 2001. This is the case even if you appoint an agent to look after your company’s affairs.

Who can be a director

To be eligible to be a director of a company, you must:

However, You cannot be a director if you:

If the company is a proprietary company – that is, it has ‘Pty’ in its name – it must have at least one director, who must ordinarily reside in Australia.

If the company is a public company (and doesn’t have ‘Pty’ in its name), it must have a minimum of three directors, at least two of whom must ordinarily reside in Australia.

There are numerous and important legal responsibilities imposed on directors under the Corporations Act 2001 and other laws, including the general law.

Of these duties, some of the most significant are:

If you are a director or are about to become a director of a company, you should make immediate inquiries to ascertain if there are any unpaid and unreported Pay As You Go (PAYG) withholding or Superannuation Guarantee Charge (SGC) amounts.

Directors of a company that fail to meet a PAYG withholding or SGC liability by the due date will become personally liable for a penalty equal to the unpaid amount. The Commissioner of Taxation may issue you with a director penalty notice (DPN) in respect of a penalty which is equal to your company’s unpaid liabilities.

Illegal phoenix activity involves the intentional transfer of assets from an indebted company to a new company to avoid paying creditors, tax or employee entitlements.

The directors leave the debts with the old company, often placing that company into administration or liquidation, leaving no assets to pay creditors. Meanwhile, a new company, often operated by the same directors and in the same industry as the old company, continues the business under a new structure. By engaging in this illegal practice, the directors avoid paying debts that are owed to creditors, employees and statutory bodies (e.g. the Australian Taxation Office (ATO)).

Illegal phoenix activity is a serious crime and may result in company officers (directors and secretaries) being imprisoned. This practice severely disadvantages creditors and gives these business operators an unfair competitive business advantage.

While illegal phoenix activity can take many forms, the key characteristics are that:

Guarantor or security over personal assets

As a matter of commercial practice, a bank, trade creditor or anyone else providing finance or credit to a company may ask you for:

Where personal guarantees are provided by you, you may become personally liable for the repayment of company loans or debts.

If your company is acting as a trustee, in some circumstances you may become personally responsible for liabilities incurred by the company. For example, if the trustee company breaches the terms of the trust.